Hide Search
You are here: Home / The Life and Times of Jesus / Jesus, Worship and Work
Reading Time: 3 minutes

Jews and Samaritans did not speak to each other and did not worship together. More importantly, a respectable rabbi and a sinful woman would never have had a conversation in public.

The beautiful thing we see in the Lord’s encounter with the Samaritan woman in John 4:7 is that Jesus doesn’t care about any of that. Jesus cares about bringing people to the Father.

For the Samaritan woman, coming into contact with the living God has drastically altered her direction.

This woman is entering work and rest that is not in vain and now doesn’t need her water jug any more than Jesus, who had been weary and hungry, now needs a sandwich.

At that point, the disciples re-appear and the conversation turns to the topic of Christian labour. But the backdrop is still worship, as we will see.

Meanwhile, the disciples were urging him, saying, “Rabbi, eat.” But he said to them, “I have food to eat that you do not know about.” So the disciples said to one another, “Has anyone brought him something to eat?” Jesus said to them, “My food is to do the will of Him who sent me and to accomplish his work. (John 4:31-34)

There is a kind of labour that leaves you refreshed and satisfied. It’s the kind of satisfaction that dwarfs banoffee pie and comes from doing the will of the Father for the sake of others.

A person filled with the Spirit is the kind of person who forgets to have breakfast for all the right reasons. It’s a productivity that is its own reward and brings with it its own, deep satisfaction.

Do you not say, ‘There are yet four months, then comes the harvest’? “Look, I tell you, lift up your eyes, and see that the fields are white for harvest… I sent you to reap that for which you did not labour. Others have laboured, and you have entered into their labour.” (John 4:35-38)

Here is a field ready for harvest. Centuries of seed sowing has taken place and now is the time for harvest, starting with an unlikely community of Samaritans (John 4:39-41).

While Jesus was talking to the disciples, this woman had dropped her Evian and headed back to town. All she knows is this, “I’m busted. I’ve been found out and Jesus told me the truth.”

That’s her testimony. That’s all she has to say, but she says it. She says it to anyone who will listen. She does the work of an evangelist.

She has a message. It’s personal, “Come see the Man who told me everything I ever did”, and it’s powerful, “Could this be the Messiah?” 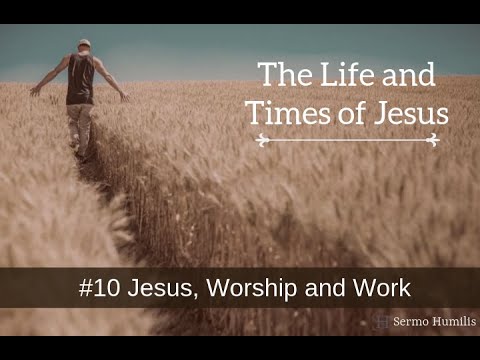 New Christians are like this. They often talk with great conviction and power. They just open their mouth and let you have it. They don’t know much, but they’re highly motivated.

They go around telling everybody and anybody the Good News.

This makes some seasoned church-goers nervous, and so they start saying things like, “Now, you gotta be sensitive about all this. You gotta scale it down a little bit.” And they domesticate you and they put you in a small white room and they give you a Bible study leader and then they sit on you until you calm down.

One potential hazard of this kind of domestication is to reduce Christian service to mere busy-work. We get busy with programs and committees and small group exercises. We get busy getting everybody else to be busy as though being busy was a ministry. Yay for us!

We talk all about what Jesus said and did without being moved to act on what He said and did.

Now, Christian service is good. Planning and thinking and praying and studying are good, and commanded. But unless the labour is grounded and motivated by the gut-busting power of a new affection toward Jesus, then it’s labour that misses the mark. It’s labour without the worship.

The response of the Samaritan woman to Jesus gives us the counterweight to Christian busyness. It’s reflexive. It’s not premeditated, not contingent on budgets or programs or policies.

The Samaritans who came to Jesus were not looking to see if they could help Him organise a lamington drive. They were looking for someone to save them. And He did, and they adored Him.

The point being, it is not a case of do we labour or do we worship. The chief characteristics of worship are both labour and rest. Labour bounded by the will of God and rendered to others out of a deep affection for Jesus. And rest that comes from being content with the will of God and knowing that our labour for Him is not in vain.

After 40 years of wandering in the wilderness, Israel finds itself

After the Devastation of the ark, the Tabernacle, and the priesthood